Skills that professionals only know: how to distinguish between LED grid screens and LED transparent screens

It is difficult for many customers to make a choice between the LED transparent screen and the LED grid screen. They don’t know which product should be used in their project. This is mainly because they don’t know the characteristics of the two products very well. Here is the big color The editor of the source compares the similarities and differences between the two products. After reading them, you will no longer have these troubles.

The two are the same:

1 The design principle is the same:

The led grid screen is also called the led light strip screen. Like the transparent led display, it uses a hollow design on the basis of the traditional led display. The redundant part is removed, and the product transparency is provided, so that the installation of these two models The position of the display screen has a higher light transmittance.

2 The installation positions have intersections:

Both are locations where glass curtain walls are installed. The main purpose is to take advantage of their high permeability characteristics without affecting indoor lighting. This is mainly due to the impermeability of traditional outdoor LED displays, which suppresses indoor light. It is not conducive to the health of indoor staff. As early as 2015, some European countries have introduced relevant policies not to allow the installation of outdoor LED displays without permeability.

The difference between the two:

4 The weight is different: because the LED light bar screen needs to provide the protection level, it needs to use the glue water-proof process, which will increase the weight of the light bar itself. Because the light bar itself is heavy, it must be made of cold-rolled steel plate or die-cast aluminum. Making the box body will cause the weight of the whole screen to be heavier. Generally, the weight of a single square is about 20KG. This process does not exist for transparent led screens. The light bar will be thinner. Some Shenzhen adopts a borderless design. The screen is lighter, and the weight can be as light as 12KG/square meter, or even lighter.

Oika focuses on high-end creative LED displays , and can provide customers with these two products to meet the needs of different customers. However, the transparent led screen greatly surpasses the led strip screen to become a more popular product. 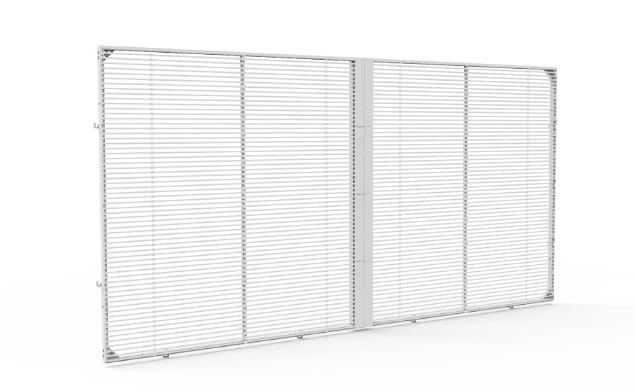 The transparency at the highest pixel level can be as high as 75%-95%, and the screen is almost invisible out of the 10m line of sight.

Easy to assemble and debug

The module can be quickly and easily fixed to the bracket with both hands directly, or it can be customized for installation.

Lightweight and easy to transport

Including all structures and power supplies, the weight per square meter is only 12kg, which is only half the weight of a traditional screen. The ultra-light weight is very convenient to transport and save costs.

Using customized high-brightness and high-efficiency LED chips, the maximum power consumption is only 800W when the screen brightness is 5000cd ㎡. LED energy consumption is not only lower than that of projection and LCD displays, but the high brightness of the screen can ensure that it is still clearly visible in the daytime sunshine.

The light weight is due to the grid of the screen, which allows the LED display to permeate the wind, so its wind load capacity is extremely strong.

The concept of IP67 is soaking and waterproofing, that is, the product is soaked as a whole. Compared with the surface protection of IP65, it can be described as a dimensional gap.

Easy to install and maintain

No steel structure installation, no air conditioning, can be installed front or rear.

The LED grid screen is a grid-shaped LED screen composed of light bars, also called LED light bar screens. Mainly used in outdoor walls, glass curtain walls, building roofs and other fields. The LED grid screen breaks through the many restrictions on the building and walls of the conventional LED display, making the project more flexible and more selective.

The service life of the LED grid screen is between 2-3 years. It is a lighting LED display product. It is generally used indoors because its permeability reaches 30-60% and the overall power consumption is relatively low. Natural ventilation and heat dissipation, but the relative temperature rises, and the installation environment is strict. The advantage is that the control box and the installation structure are integrated design, and the installation space is small.

The service life of the transparent LED screen greatly exceeds that of the LED grid screen, with a lifespan of up to 50,000 hours. It is usually used in architectural media and interactive media scenes. It has very low power consumption and superior energy saving effect. This transparent LED glass is extremely thin, only ordinary glass The thickness is easy to install, the transmittance is 99%, the light transmittance is ≥80%, and there is no need for heat dissipation and strong weather resistance. It has the advantages of waterproof and anti-impact.