Why did the giant naked eye 3D LED display explode?

Naked eye 3D is a general term used to achieve stereoscopic visual effects without the use of external tools such as polarized glasses.

At present, the representatives of this type of technology mainly include light barrier technology and cylindrical lens technology.

The younger the age, the smaller the myopic refraction, the better the visual improvement effect of training children.

In fact, the naked eye 3D LED display technology has been launched as early as 2012, but there are not many practical application cases. The biggest problem that hinders the popularization of this technology is the lack of relevant technologies and the layout of resources and applications.

As the application of LED display more and more widely, however, people is higher and higher demand for creative display, 2 d graphic display can not meet the increasing demand, people are more hope to be able to really restore the three-dimensional information of the real world, therefore, a 3 d display technology in the application of transparent LED screen has become the research hot spot and direction in recent years.

So why are giant, bare-eye 3D LED displays so popular? 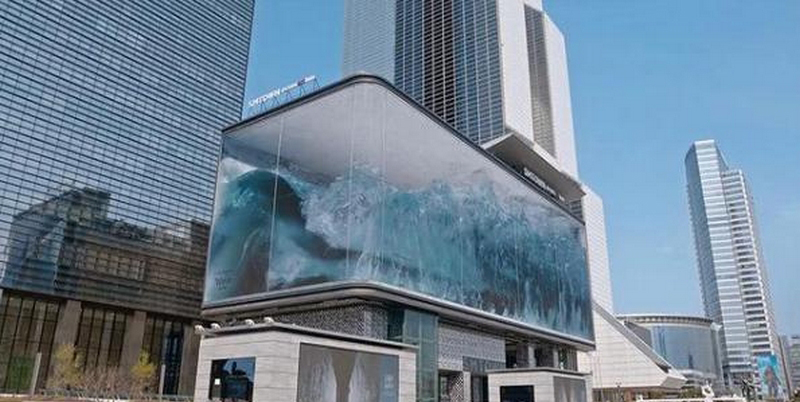 The technique works by adding a slit grating to the front of the screen so that an image that should be seen by the left eye is obscured by an opaque streak on the LCD screen.

In the same way, when an image is displayed on a LCD screen that should be seen by the right eye, an opaque streak obscures the left eye, allowing the viewer to see a 3D image by separating the view from the right eye.

The biggest advantage over slit grating technology is that the lens does not block the light, so the brightness is greatly improved.

3. Point to the light source, which is simply to accurately control two sets of screens to project images to the left and right eyes respectively.

2. Chongqing Guanyin Bridge naked eye 3D LED display: a large mysterious spaceship slowly drove out of the building and flew around the building, just like being in the scene of a science fiction movie...

Such a feast of the visual senses has already appeared in our lives.

The technology and the impact are impressive.

Compared with other screens, 3D LED display pixels can glow by themselves, featuring higher brightness, brighter colors, higher contrast, ultra-thin and other features. It has a natural and comfortable field of vision and a wider viewing Angle, and can be integrated into creative display to create a more realistic and shocking immersive experience scene.

In VR, AR, stage art and other immersive specific places have a broad prospect.