At what distance does the P1.875 indoor LED display look clearest?

LED display is a relatively hot new media technology because of its advantages. Compared with other large screens, the P1.875 indoor LED display has the advantages of bright colors, stable display, long service life, and wide visual range. And other fields have been applied and developed. For users, the viewing distance of the P1.875 indoor LED display is very important, as it will affect the coverage of advertisements and the viewing angle of users.

The viewing distance of the LED display

P1.875 indoor LED display is mainly used in commercial fields, such as corporate meeting rooms, chairman's office, network video conferences, information presentation needs of schools and educational institutions, and with its high brightness, seamless joints, light weight and flexibility, and installation space occupation Several aspects are attractive to them, but at present there are still several visual contradictions that cannot be reconciled in the small-pitch LED display. If these contradictions cannot be properly resolved, the experience of using the LED display will be greatly affected. The following examples illustrate:

1. Brightness reduction and grayscale loss: One of the most significant differences between indoor and outdoor display applications is the change of ambient light. When the LED display is used outdoors, the intensity of sunlight during the day is very high, so the outdoor LED display needs to be bright, bright and bright! In fact, in order to get a better display effect outdoors, the brightness of the LED display must reach 4000cd/m2 (luminous brightness per unit area), while indoors, the brightness of the full-color LED display must be 800cd/m2 (candela/square). M) in order to ensure the normal operation of the display screen, but at the same time, studies have shown that the brightness of the light-emitting or display device is between 120cd/m2 and 150cd/m2 to get a compromise point in health and visual effects, and LEDs are used as self Luminous display technology is different from passive luminescence. Human eyes are more sensitive to direct light sources, so lower brightness is needed for human eyes to be comfortable. 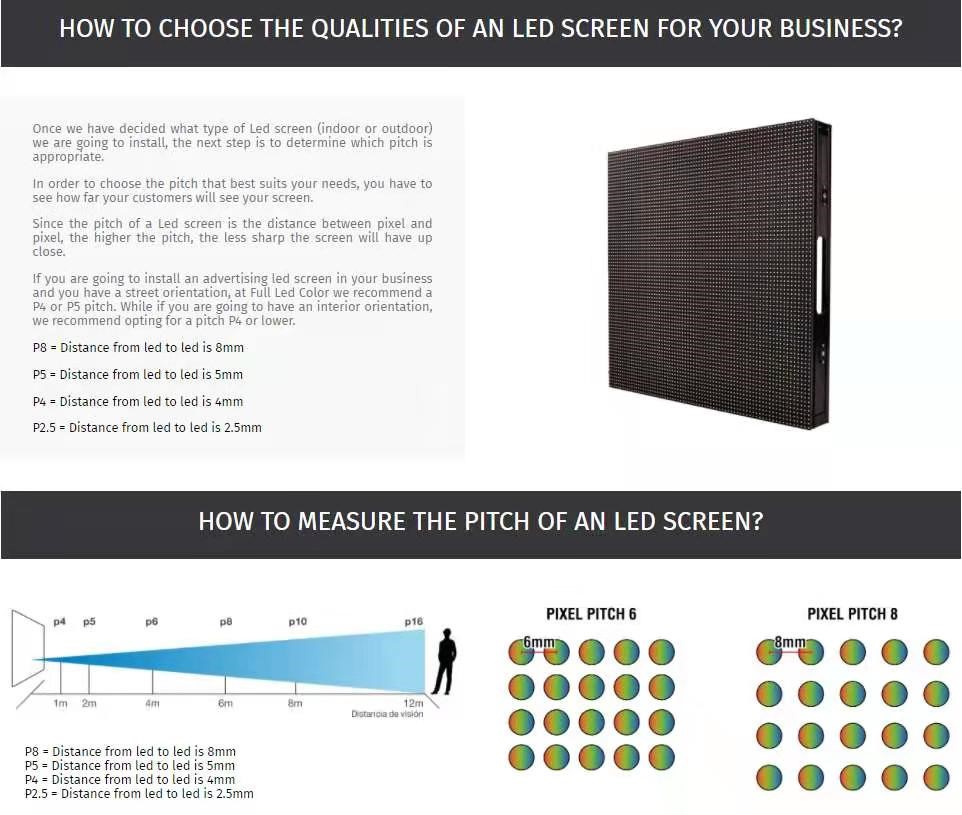 2. Improved picture quality and increased dead pixels: The picture of the LED display is composed of countless small LED lamp beads, so the fineness of its picture quality is determined by the dot pitch (or density) of the small lamp beads, per unit area The larger the number of small LED beads, the higher the image quality of the LED display, and the richer the display of screen details. Based on this, the current LED display is developing towards the direction of small pitch and mini LED display. .

3. Close viewing and severe fever: As an indoor display device, especially a product positioned as a display platform for small and medium-sized conference rooms, audiences usually watch and use the screen at close range. Take a typical conference display scene as an example , The distance between the conference host and the participants is about 1.5-5m from the screen. However, the luminous efficiency of the LED display is very low.

Studies have shown that in the energy conversion process of the LED screen, the luminous efficiency of the LED is only 100lm/W, and its electro-optical conversion efficiency is only about 20~30%, that is to say, only 20~ About 30% of the input electric energy is converted into light energy, while the remaining 70~80% of the energy is all consumed in the form of heat radiation; for comparison, the incandescent lamp commonly used in the past can almost convert all the input electric energy into light energy Therefore, the heat of the LED display is very serious.