In the era of 5G and Internet of Everything, LED car screens have a broad blue ocean market

With the maturity of 5G technology, the interconnection of everything and the advancement of intelligence have also promoted the development of the LED display industry. As a subdivision of this industry, LED car screens have many unexplored blue ocean markets. In recent years, with the loosening of control policies for on-board display screens, the successful piloting of full-color advertising screens for domestic public transport in multiple cities, the widespread use of smart cars, etc., the application of LED on-board screens has increased, and the on-board LED display market has shown unprecedented vitality. 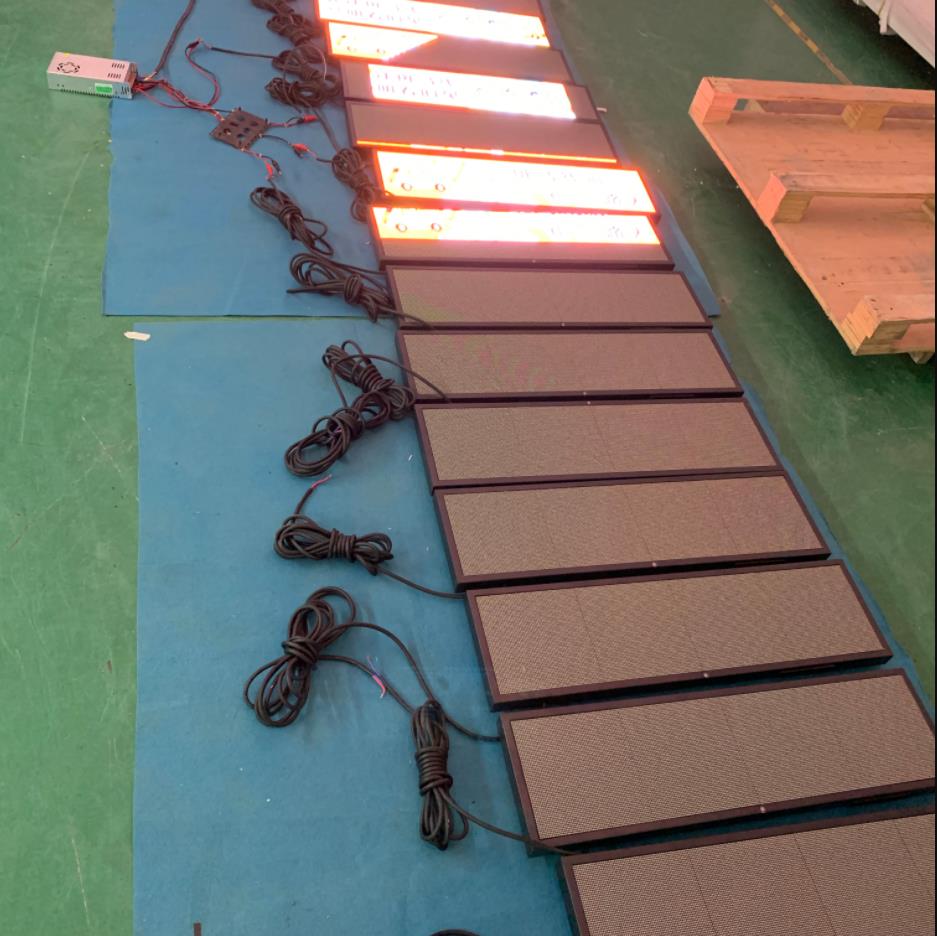 Favorable policies to expand the market

At the beginning of the birth of the LED car screen, it was mainly used for the display of service information of buses and taxis and the placement of advertising content. It can be used to place commercial advertisements, broadcast news, forecast weather, film and television information, stock market information, and sports information. Introduction, service introduction, etc., while providing convenience to the public, while earning advertising fees, to a certain extent, it is conducive to the return of government funds and reduces the financial burden. Due to various benefits, LED car screens for buses and taxis have begun to be applied on a large scale in first- and second-tier cities, becoming the city's flowing "business cards" and injecting new vitality into urban traffic.

In addition to bus LED car screens and taxi LED car screens, there are also LED mobile media cars. The LED mobile media car was born the latest. It is mainly composed of a car frame, LED display and other supporting equipment. It has a high-definition, high-brightness, full-color and delicate display screen. The advertising effect is greatly enhanced. The application has obvious advantages in some specific places. A good market response.

According to public information, China plans to have a railway network of about 200,000 kilometers by 2035, including about 70,000 kilometers of high-speed rail. By 2050, a higher level of modern railway power will be built in an all-round way. This means that China's high-speed rail operating mileage will be nearly twice the current operating mileage. The upcoming new round of transportation infrastructure construction boom will not only bring more project opportunities for traditional manufacturing industries, such as steel and communications, but also bring new development opportunities for related supporting facilities manufacturing industries. Vehicle display The industry is one of them.

In order to enhance passengers' experience on high-quality transportation such as high-speed rail, small car screens are usually installed to provide passengers with functions such as entertainment and information inquiry during the journey; they are installed in public areas, such as the screens at the junction of cars , Passengers can query and display service information on it, such as the arrival station ahead, weather and driving speed.

As the pace of urbanization continues to accelerate, central cities continue to radiate to the surrounding areas, and urban rail transit construction booms all over the country. As a supporting facility of the subway, the subway car screen can provide such as digital broadcasting, itinerary display, and multimedia playback. And other functions. The subway LED car screen can display subway lines, advertisements, arrival information, safety reminders, etc. The construction of high-speed rail and subway transportation has also expanded the market demand for supporting facilities, which will provide fertile ground for the application of small on-board display screens and touch screens with interactive functions.

In the era of intelligence, with the advancement of technology, LED car screens have more possibilities in the future

The wireless transmission and cluster release of the on-board screens can complete diverse and complex tasks at low cost in a dangerous environment through mutual perception, interaction, information transmission, and collaborative work between individual on-board screens. With the advancement of science and technology, the development of a vehicle-mounted screen intelligent cluster system has become an important development direction for vehicle-mounted screen information transmission. Through close collaboration, the on-board screen cluster system can reflect more excellent coordination, intelligence and autonomy than traditional manual systems. Therefore, from the perspective of application styles, the application styles of car screens have gradually developed from a single platform to a multi-platform "cluster" direction.

From a technical point of view, the research and development hotspots of vehicle-mounted screens have gradually evolved from single-screen control to multi-screen collaboration and formation networking. For example, in the military, the mobile command vehicle is configured to ensure real-time voice and video communication with the command center when it is used in mobile operations; a temporary wireless network is built through the on-board cluster equipment, and the individual soldiers are commanded and dispatched through the on-board dispatching equipment. The mass release of information can meet the needs of military combat exercises, military simulation confrontation, rescue and disaster relief operations, and effectively adjust military deployment, complete tasks accurately and quickly, and put into action on time, easily achieving cross-regional, Cross-field and cross-arms cooperation, service and multi-level coordination for emergency dispatch.

In recent years, many forward-looking companies have been advancing OLED technology, accelerating the research and development of automotive OLED displays, and grabbing the advanced market for automotive applications. The popularity of the Internet of Vehicles has brought a market for on-board advertising screens. In the past, to create advertisements on car screens, some issues must be considered, such as the duration of the advertisement and the number of times it is played per day.

The entire program arrangement process is full of repetitive and boring manual calculations, which are time-consuming and laborious. However, with the continuous innovation of research and development technology, today's vehicle control system has realized the intelligentization of advertising simulcast control. Only need to enter the corresponding requirements, you can work out a suitable schedule. After eliminating these cumbersome steps of manpower scheduling, media companies have saved a lot of manpower and material resources, and more advertisers choose LED mobile media vehicles as a publicity method.

With the widespread use of smart cars, the demand for more content to be displayed will also increase. More content needs a larger screen to carry. Therefore, large-size smart car LED displays will become a car LED screen company to break the status quo of the industry. The breakthrough. It is reported that in order to cope with harsher climatic conditions and driving environments, automakers are completing the design verification of the new Mini LED on-board display technology, so as to improve the lack of driving safety of the existing TFT LCD display to meet the rapid growth. Needs of the automotive market. Due to the particularity of technology and the space of market demand, the new Mini LED-backlit TFT LCD display can collect resources from technical routes, industrial chains and application suppliers to form an independent industrial ecosystem. In this way, it can not only adapt to the technological development needs of automakers more quickly, but also optimize product performance to the greatest extent.

It is understood that with the breakthrough of the new Mini LED backlight TFT LCD display in automotive applications, as the penetration rate of automotive display technology in the passenger car market is getting higher and higher, only the front and rear markets in China will have it, and it will reach the annual rate in five years. Market space with an output value of nearly 100 billion yuan. The new car display will become the most important display market in China after smart phones and TV displays. Nowadays, companies have applied LED display screens to car windows. In addition to the existing intelligent interaction functions in the car, it is equipped with intelligent functions such as intelligent interaction of windows. When the owner is close to the car, the car can perceive and recognize the identity of the owner, and display information such as greetings, cruising range, itinerary and route recommendations on the windows. At the same time, this function can identify the driver's identity in real time and enable corresponding permissions for car owners, family members, authorized users or visitors. The internal screen design of the windows can interact with passengers. The interactive window display, through the touch panel, image capture, transmission and other technologies, can enable passengers to interact with the scenery outside the window, freeze the fleeting beautiful scenery, understand the local customs, and record the bits and pieces of the journey.

In the future, we will integrate urban intelligent AI technology, big data technology, satellite positioning technology, advertising time-sharing self-service payment technology, and urban smart light poles, outdoor large-screen wireless intelligent connection, and complete the outdoor full-scale V2X (vehicle-linked everything) concept. The era of intelligent linkage and interaction of media. In the future, the urban smart light poles and smart large-screen control system will be planned and transformed, and the interactive linkage function of outdoor all-media can also be realized. In addition to commercial advertising applications, it can also be widely used in government publicity, celebrations and public welfare activities. In the future, when the car is started, the car screen will automatically play the music that the car owner likes based on the statistics of big data and provide real-time road conditions, changes in the company's surrounding and internal environment, and office interface through the pop-up transparent screen. The car owner chose to turn on smart driving, began to check work messages and deal with urgent matters. Or take a bus, and when the vehicle reaches a certain area, the smart light pole screen will play blessings as required. With the advent of the intelligent era and the advancement of LED car screen technology, the market is bound to show a "blowout" state.