What shape of LED display is the most cool to install indoors?

What shape of LED display is the coolest to install indoors? The development of the LED display industry has been around forty years. From the early single and double color to the later full color; from the beginning of outdoor direct insertion to the "popular" of surface mount (SMD) packaging, to the COB packaging that has appeared in recent years; LED display regardless of technology or craftsmanship, Both have made considerable progress. In this process, the dot pitch of the LED display is getting smaller and smaller, and the LED display is gradually moving from some engineering high-end application markets to the mass commercial display market. 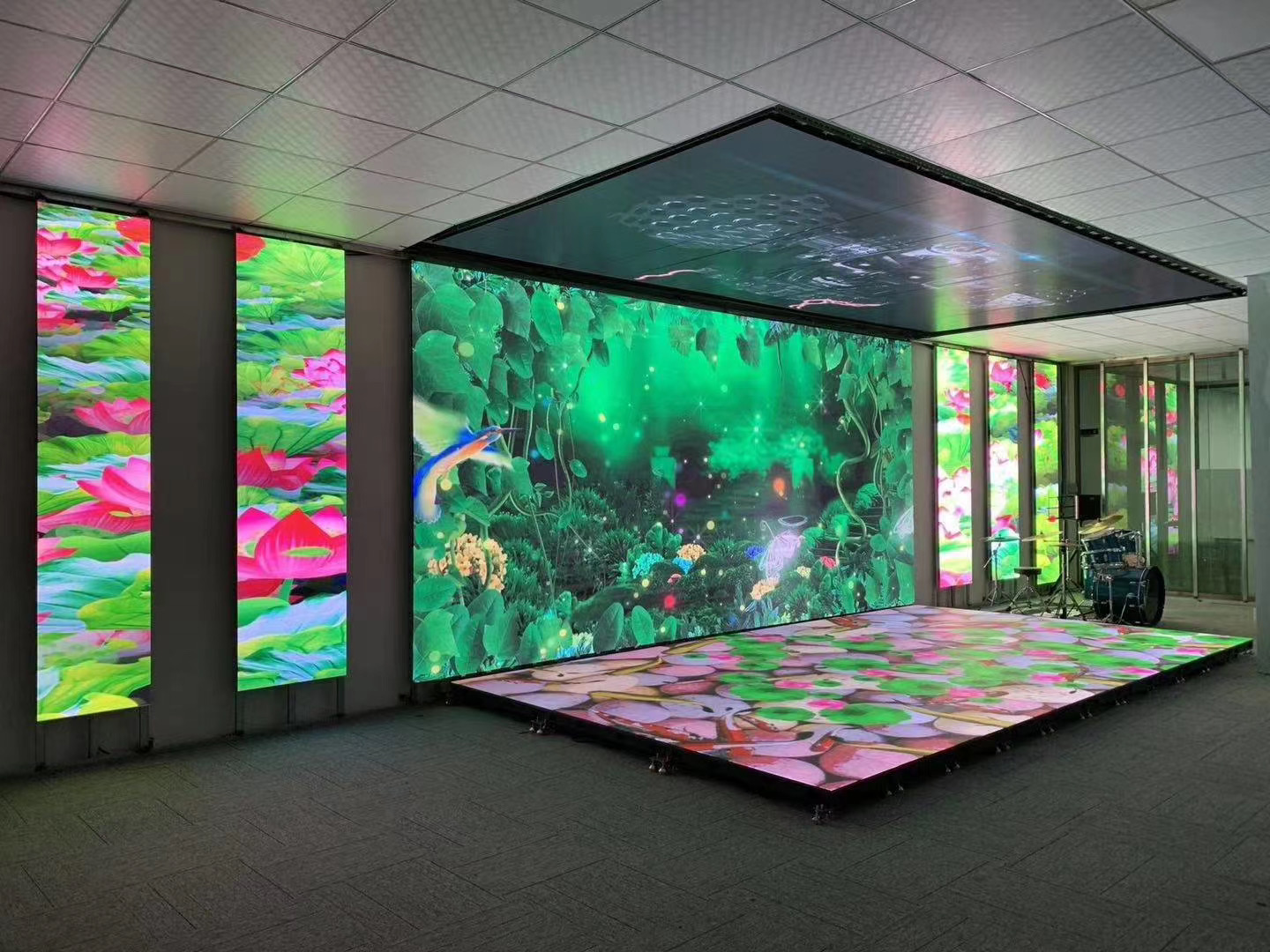 There are many styles of led creative screen: arc, circle, curved surface, tetragonal hexahedron, cross-screen, letter, triangle screen, oval screen, etc. Its size and size can be customized according to requirements. Compared with conventional LED display screens, LED creative screens are biased towards users with special needs and are currently mainly used in performing arts venues, outdoor media, exhibition hall squares and other environments. Due to the different appearance and structure of LED creative display screens, the technical requirements for manufacturers are also more stringent.
If the manufacturer's technology is not good enough, the spliced LED screen will have many problems such as uneven appearance due to excessive seam gaps and discontinuous splicing surfaces, which will affect the viewing effect and destroy the aesthetics of the overall design. And more importantly, the circuit and structure design of the LED creative display is complex, which puts high demands on the R&D capabilities of manufacturers.

Nowadays, in terms of technology, new technologies such as 3D display and VR (virtual reality) are being introduced into the application of LED display, which greatly enriches, or changes the original form of LED display. Therefore, the LED display has become more and more humanized from the single passive acceptance method at the beginning, and can even realize the basic "human-computer interaction" mode. These intelligent development technologies will bring more to the creative display. Of display space.
The biggest feature of the LED display is that the size changes with the heart, and it is not affected by the indoor and outdoor environment. From a technical perspective, in addition to the traditional standard unit modules, the current LED display also has triangular modules and flexible modules. Transparent modules, equipped with a powerful customized control system, can meet most of the creative needs.

With the development of technology, the price of conventional LED display products is gradually falling, the competition among industries is extremely fierce, and price wars occur frequently, causing the profits of enterprises to be continuously squeezed. Such changes have brought a huge impact to the conventional LED display market with low barriers to entry. Price wars and homogeneous competition have almost become the norm in the market.

From the perspective of consumers and the general public, the traditional LED display screens are in the middle distance, and the streets are full of squares or rectangles, and the display method has brought serious aesthetic fatigue to people. In this highly informative and digital age, people are often not too interested in sparse and ordinary things and LED displays, especially large outdoor display screens, often shoulder the important task of information dissemination.

Therefore, to attract the public’s attention to the maximum, a variety of creative displays have emerged. More designers in the decoration industry have also begun to incorporate creative displays into their design concepts, which will make LED displays more attractive. Widen higher-end market applications.

In daily life, the LED display screen is often affected and restricted by the building structure during the installation process. In the face of complex engineering projects, conventional LED displays are often helpless. At this time, it is necessary to discuss and formulate feasible solutions according to the structure of the building and the needs of customers. From this point of view, the creative display is sometimes just a "workaround" in the installation process of LED displays.

However, it is precise because of this characteristic of creative display that creative display has higher requirements than conventional displays in terms of raw materials, technology and system content. It can be seen that sometimes creative display is not something that any LED display can do, which requires strong financial and creative strength as the backing.

In addition, the development of creative display, in addition to the breakthrough of the technical bottleneck and the multi-party cooperation of the system structure engineering, the most fundamental point is that the creative display can bring huge profits to the enterprise and a very good brand advertising effect. 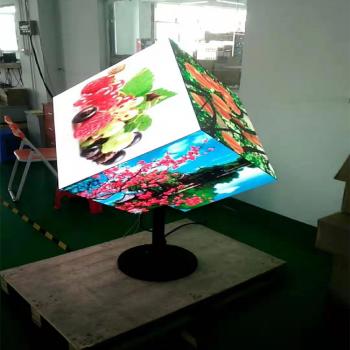 What kind of LED special-shaped display screens are installed indoors are the coolest. Traditional display products are becoming less and less differentiated. It is not easy to get to a place. To avoid falling into homogenization competition again, Lianshuo changed its business thinking and changed to provide customers with creative product design solutions. The opposite sex screen is one of the directions. This will also be a major trend in the development of the led display industry. Because of its irregular and ultra-conventional appearance, the special-shaped LED screen satisfies the designer's creative inspiration and brings the audience a novel and unique visual experience.

In the LED display industry, conventional LED displays still occupy the main market. Although LED special-shaped screens and small-spacing products are more popular in the market, their market sales are far from enough. At present, under the precipitation of years of development in the led display industry, led display products have also obtained breakthrough developments that change in time. From in-line to surface mounting, from conventional display to creative display, the pace of enterprise product innovation has never stopped. Nowadays, creative displays are becoming more and more prosperous. To seize market opportunities, companies specializing in LED special-shaped screens have played new tricks in creative displays, innovating LED small-pitch P2/P2.5/P1.5 ball type Various shapes of screens and cylindrical screens have now formed a new industry trend.


The emergence of special-shaped screens broke the large-screen splicing system that can only be spliced into a cold rectangular shape. It can be spliced into various irregular shapes at will to display some highly creative content, which can not only attract the attention of the audience the first time. To achieve a better publicity effect, but also to better expand the application range of LED display splicing.
At present, in the domestic LED special-shaped screen market, the application scope is gradually expanding, and many businesses and enterprises have chosen special-shaped screens as their product display screens. There is a cloud in the industry. Good publicity attracts attention and it succeeds by one-third; it attracts interest and it succeeds by one-third; the product is successfully purchased, and finally it succeeds, and the heterogeneity has an abnormal shape. The display of the screen can better achieve two-thirds of the success.


The Sunset Strip, located on Hollywood Boulevard in Los Angeles, California, is a must-visit attraction, and the movie billboards on both sides of the road are its unique landscape, and it is also a propaganda position for many businesses and enterprises. And recently, Hollywood will also create an extraordinary display and publicity effect. It plans to build a "high-tech and interactive" billboard. One of the design schemes turns the LED display into a torch with a bow. There are wonderful displays everywhere, and the elegant butterflies show the beauty of the agile propaganda.


And more and more domestic enterprises also choose to make their products shine through the promotion of special-shaped LED screens, which is the icing on the cake. Such as LED cylindrical screens, LED spherical screens, etc., 360-degree viewing angles without dead angles, allowing LED spherical screens to act as a communicator of information, effectively expanding the visual space, multi-screen simultaneous display, eliminating viewing dead zones, and satisfying 360-degree viewing angles. The display of the complete image content within the scope, the graceful and elegant picture, shows the perfect integration of the beauty of the goods and high-tech technology, and greatly enhances the brand image and reputation of the merchants.


The ever-changing shape of the special-shaped screen allows it to have better opportunities to show its skills in more fields. And in the magical science and technology museum, because of the different appearances of the special-shaped screen, the profound technology and the deep sky are all close to you and within reach. For example, in the sky above the Shanxi Science and Technology Museum, a special-shaped LED display is used to create a gorgeous picture of the Milky Way. The galaxy is shining, and you can see a sea of stars when you look up.
The special-shaped screen + the sky and white clouds The unique sky is deep and wonderful, and in the "time and space tunnel" of Guangzhou Baiyun Airport, the LED special-shaped cloud-shaped screen is perfectly combined with it, and the landscape and the name blend together to create the perfect combination of the LED special-shaped creative display and the scene With the help of new technology to create a characteristic landscape and cultural corridor of “combination of dynamics and statics, a combination of people and scenery, and combination of virtual and reality”, the classic masterpieces can realize an intelligent interactive light entertainment experience integrating public services, art display, and advertising.


The changing era has different characteristics, and the customized LED special-shaped screen is the product of the development of the times. The special-shaped screen is well-known for its beautiful expression effect and unique shape. Its incisive display, innovative design concept, and high-tech experience subvert the traditional display experience and bring a different visual experience. . With the continuous improvement of user experience requirements in the future, like a strangely shaped screen, it will be able to present more different "view" views.
Article KeyWords:shape of LED display
Meta: Article Feed Sitemap Feed
SZJYLED FriendLink:
Mini Led Display Fine-Pitch led display Led Display Screen