5G helps the continuous upgrading of the LED display industry

2019 is hailed as the first year of 5G commercial use. The ban on 5G supplier Huawei by Western countries led by the United States not only failed to curb the development momentum of 5G, but instead made a good 5G advertisement for Huawei. At the Spring Festival Gala in 2019, 5G technology was also used in the live broadcast of the party. 5G was used in such an important occasion as the Spring Festival Gala, which also marked the arrival of the 5G era.

The network transmission speed of 5G is significantly higher than that of 4G. As a next-generation communication network, 5G is not only characterized by faster speed, but more importantly, 5G has the characteristics of low latency and high capacity. According to Internet reports, the world’s most The fast 4G network speed and the fastest broadband network speed are combined, and there is no 5G network speed. The theoretical network speed of 5G is 10000 Mb/s. You can download a 4K movie in a few seconds. The frequency range of 5G signals is 28~39 GHz, which is 20 times wider than 4G roads. With 5G, even if 100,000 people watch the game together on the football field, the network will not be crowded.

Because 5G can allow 1 million devices to access the Internet at the same time per square kilometer. The higher speed of 5G will make the download of any large file and the playback of high-definition video more feasible, which means that the simultaneous transmission of a large number of videos through the Internet will no longer be stuck, and there will undoubtedly be more development opportunities for LED high-definition displays. , And display space.

As a display device, the led display needs to continuously improve its hardware functions in order to integrate with the constantly updated Internet transmission technology. LED display screens must continue to carry out technological innovations in terms of display quality and clarity to meet the needs of the 5G era. For led display to realize more intelligent display, it needs to be combined with AI, VR, AR and other emerging technologies. The full application of these technologies requires a certain network as support. The arrival of 5G will undoubtedly accelerate these emerging technologies and LED displays. Combination of screens. 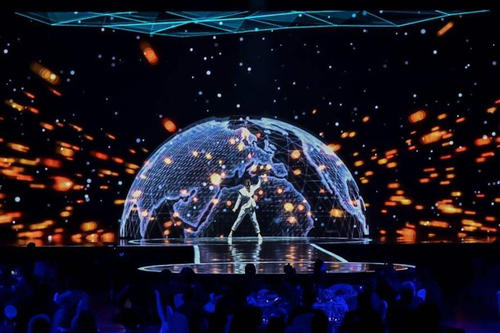 The advent of 5G technology has put forward higher requirements for the performance of LED display screens, which will also encourage LED display screen companies to practice their internal skills and improve their own performance. This is the ability to better integrate with 5G.

With regard to 5G LED displays, challenges and opportunities co-exist. LED display companies must create greater brilliance and promote the constant development of their own companies and the entire industry under the boost of the 5G wave.

If you have led display products you want to know, you can provide your information below.